Home › Mental › Autosuggestion and Self Help

Autosuggestion and Self Help

“Every day, in every way, I am getting better”. This famous phrase was written be Emile Coue de Chataigneraie, or as he is now known simply Emile Coue. These days there are so many glossy self help books available that it can be quite a surprise to actually get your hands on one of the books which founded so much of what the self help movement now talks about. Anyway, let’s start by introducing Emile Coue. He was a French pharmacist who live lived between 1857 and 1926. His interest in positive affirmations began when he noticed that the efficacy of the medicine which he prescribed was much better when it was handed over accompanied by praise. He came to believe that our mental state can, to a large extent, determine the world in which we live.

Emile Coue believed that the two main drivers in our lives were “will and imagination”. If these are in conflict then the imagination will always win. He then went further and introduced the idea of autosuggestion which he defined as “The influence of the imagination upon the moral and physical being of mankind”. Strong words in deed and to just make sure that there were no mistakes in understanding his ideas he said “The will must not be brought into play when practising autosuggestion”. He then laid down these four rules:-

3. When the will and imagination are in agreement then their impact is multiplied.

4. The imagination can be directed.

Coue prescribed suggestions for encouraging the patient to adopt a relaxed state which would be open to suggestions and in this he was showing his research into hypnosis. However he also noted that mental illnesses were harder to cure than physical ones.

He was also very clear that some cures, such as re growing limbs, were clearly impossible and that this type of achievement should not be sought after.

Emile Coue’s ideas were acknowledged by his peers and towards the end of his life he published his short book “Self mastery through conscious autosuggestion “in 1922.

These days the claims being made by the self help gurus of the world have far outstripped those which Emile Coue first spoke about. It makes you wonder what this gentleman from a century ago would have thought of our world.

This is the front cover from his book. 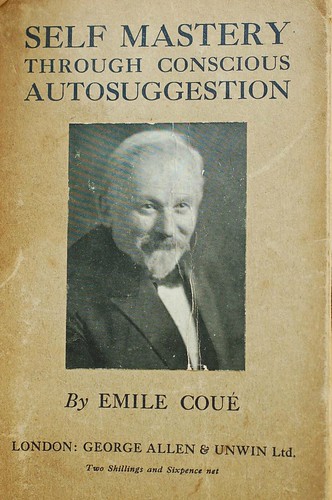 and these are the chapter headings 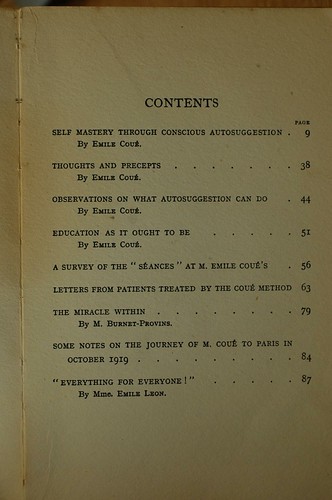 This article has been written by Mike Holly who has been exploring cottages around Hadrian’s Wall.