Home › Exercises › Roller Derby – The Healthiest Way to Let Out Your Aggression!

Roller Derby a sport with a cult following

Until a couple of years ago almost no one had ever heard of Roller Derby, one of the newest and most outrageous exercise forms, but in the past year it has begun to take over all over the world, especially with women – to whom it has become something of a cult activity. 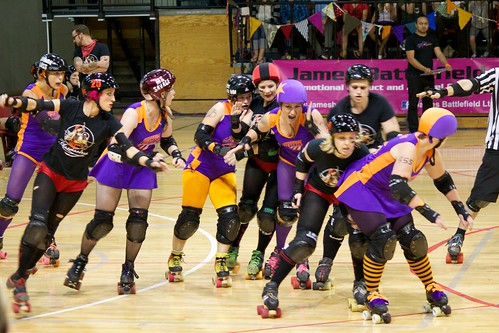 Women’s sports are nothing new, as fitness forms such as Pole Fitness and Zumba begin to dominate exercise classes and appeal strongly to women as not only a way to get fit, but also to have fun and make friends, but Roller Derby adds an element of community to this.

The basic premise of Roller Derby is two teams of five players, all on roller skates, with four defensive players and one jammer. It is set around a circular ring and both teams skate around with the defensive players sticking together in a ‘pack’ whilst the jammers must try to get through the pack, scoring one point for each opponent they successfully pass. The object of the defense is to stop the opposing team’s jammer from getting through.

This video shows you the basic rules of Roller Derby:

Although tripping, hitting, grabbing and pulling is illegal in Roller Derby, the game is very physical, and sometimes brutal! With everyone being on skates it is a fast paced game that is exhilarating to both watch and take part in, and nerve wracking for both the teams and the audience as people fall off course and collide with each other on a regular basis.

To take part in Roller Derby, you need to be fit to keep up with the pack, and also quite strong, but the sport is accessible to any person of any age. As you learn the sport, simply skating so often will build up your legs and help to strengthen your balance and body control and taking part in same sex teams means that you are unlikely to come up against someone with an unfair physical advantage.

There are both male and female teams, but as time has gone on Roller Derby has started to become seen as one of the only women’s sports with such a high level of physical contact. Roller Derby has become something of a subculture amongst women, with many players dressing in an alternative style and having tattoos and piercings, as well as special Roller Derby names (think nicknames such as ‘Liv Dangerous’ and ‘Dee Vile’). Costuming is very important and teams have an official kit with the name of their team and their own nicknames printed on them, giving a sense of community that is rarely found in other sports. 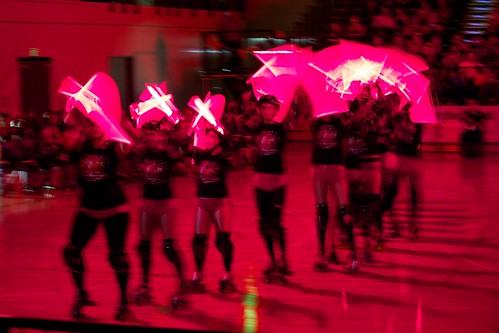 Competitions (called ‘bouts’) take place all over the country between teams from different locations and go from local events to large national finals. Roller Derby girls tend to be very proud of their teams and the community spirit that comes with them and the social aspect of Roller Derby is one of the most important factors. Parties and fundraisers make up the social side, meaning that even when the team isn’t playing they are still together in one way or another.

Unlike most sports, Roller Derby takes over the lives of its players, providing them with constant support from their team, as well as a great way to build fitness and stamina. With competitions taking place worldwide it is also possible for a team to rise in the ranks of Roller Derby and reach something of a level of fame – or if not fame, infamy!

This article was written by Caitlin a blogger who loves keeping fit and is always the first to try out a new craze. She has recently started taking part in Roller Derby and loves it. She says that it is really easy for almost anyone to get involved with too as there are teams in most towns and cities now, and even the team is full you can get involved in friendly matches and practices – making it something you can enjoy as soon and as often as you like! When she is not whizzing round on her skates or blogging she can usually be found scaling her xpole sport fitness pole and showing off her latest moves.