Americans as a whole are a chronically sleep deprived society. Over the course of the 20th century, the average length of nightly sleep dropped from 9 hours per night to 7.5 hours per night, according to a 1999 sleep article published in the Lancet. The same study found the resulting sleep debt to have a negative impact on hormonal balances, endocrine function, and even metabolism. 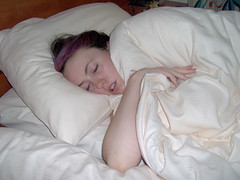 Getting the right amount of sleep (not too little, not too much) is one of the most important things you can do to maintain a healthy body and a healthy mind. For most people, that means 8 to 9 hours of sleep per night.

Now when was the last time you got that much sleep on a regular basis?

Our society has a built-in mechanism that lets sleep researchers get a glimpse into the effects of a single night with an hour more or less of sleep—daylight savings time. In the spring, when clocks “spring forward,” whole states get one less hour of sleep. In autumn, when clocks “fall back,” scores of relieved sleepers steal an extra hour of shut-eye.

In the spring, “Millions of Americans can ill afford to lose one more hour of sleep given that so many of them are so sleep-deprived,” Russell Rosenberg—board chairman for the National Sleep Foundation— told USA Today. A 2008 sleep study published in the New England Journal of Medicine found a statistically significant increase in cases of myocardial infarction (heart attack) in the three days after the spring loss of sleep each year over 20 years. The same study suggests that the extra hour of sleep in the fall before starting a Monday work week actually protects against heart attack the next day.

A 2011 sleep study also found that coronary artery calcification (a predictor of future heart disease complications) is significantly impacted by sleep. Over five years, those who slept longer on average each night had lower calcification rates than sleep deprived counterparts.

Even among children and teens, an extra hour goes a long way. Schools that start an hour later consistently report improved grades and fewer behavior problems. In older youth, an Arizona study found that an extra hour of sleep could correct the disordered sleep of most college students—25 years ago, students were getting eight hours of sleep per night and now get seven or less.

That extra hour may be particularly important during the winter months, when the decrease in day length means we’re exposed to less natural light in general. Without artificial light, the natural circadian rhythm would adjust so that we sleep longer in the winter than in the summer. If you find yourself feeling fatigued in the early or late afternoon hours, or suffering the depressive effects of Seasonal Affective Disorder (SAD), try going to bed an hour earlier for a week.

An Extra Hour of Sleep for Extra Years of Life?

With the definitive evidence that exists for the importance of sleep to our physical and mental well-being, it seems stunning that sleep has become the one healthy habit we’re most willing to sacrifice. For parties, TV, work commitments—or just a few more minutes on Facebook—a sleep schedule goes out the window. Curb heart disease, improve mood, build a healthier body… all by getting your eight hours.

If you’re having trouble getting a full night of sleep, try this tip: Set an alarm for 20 minutes before your scheduled bedtime. When it goes off, it’s time to get ready for bed—no ifs, ands, or buts. Treating bedtime with as much value as your morning alarm will allow you function at your best and stay safe at work and at home.

Author Bio: Amber Merton is a health and fitness enthusiast and writes about better health and sleep for the latex mattress manufacturer, www.Plushbeds.com.