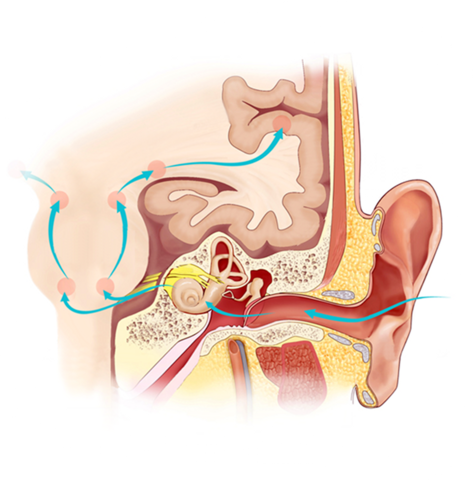 For those who are deaf in one ear, the SoundBite Hearing System could be a non-surgical solution to their problem. The hearing system makes use of the concept of bone conduction, where sound vibrations travel through bones to the inner ear. In this instance, the sound would be transmitted through the patient’s teeth. The hearing system consists of a mouthpiece designed to fit around the wearer’s back and upper teeth, as well as a microphone that is placed in the ear canal and a transmission device fitted behind the ear.

Once the microphone has picked up a sound, the device behind the ear processes it and wirelessly transmits it to the mouthpiece. The mouthpiece then creates sound vibrations that travel through the teeth and facial bones, until they reach the cochlear of the damaged ear.

Music on the Mind

Montreal Neurological Institute and Hospital conducted a study on the areas of the brain that make listening to new music enjoyable and affect one’s decision to purchase music, the results of which were published this month.  People who participated in the study were played 60 pieces of music that they had never heard before whilst having their brains scanned. The study found that the part of the brain called the nucleus accumbens is responsible for deciding whether the listener likes or is likely to buy the music.

Indeed, the nucleus accumbens is involved in the creation of expectations that may be rewarding. The lead scientist in the study, Doctor Valerie Salimpoor, explained that “Activity in the nucleus accumbens is an indicator that expectations were met or surpassed, and in our study we found that the more activity we see in this brain area while people are listening to music, the more money they are willing to spend”.

The study also found that when listening to music, the nucleus accumbens interacts with another part of the brain called the auditory cortex. As the name suggests, the auditory cortex is responsible for storing information about the music and sounds that we hear. The more enjoyable the piece of music, the greater the interaction between the two parts.

As a researcher at the institute noted, what is interesting is that “The integrated activity of brain circuits involved in pattern recognition, prediction, and emotion allow us to experience music as an aesthetic or intellectual reward”.

German researchers at the University of Turbingen have discovered that exposing people to certain sounds at specific times during the sleep cycle can actually help improve one’s memory. Sleep is important for the formation of long-term memories, where our brain processes everything we have been exposed to during the day.

In scientific terms, when we are asleep, memories are consolidated when our brainwaves have a slow, steady rhythm. If music or sounds are played in sync with this rhythm, the brainwaves become stronger and lost longer. This in turns helps to improve memory. Now if only they’d discovered this when I was still in school. Exams might have been a breeze!

Author Bio: Grace Matthews is a London-based lifestyle blogger who always make sure she has hearing protection for her ears before rocking out at a music concert.