Home › Pets › Growing Up with Too Many Pets

When I was young I dreamed of having a dog of my own. We had a family dog that was around since I was born and we had a couple of cats but I wanted one for my very own. Both my parents worked and after school my grandmother would take care of us. She was not a fan of any type of pet and I could never understand why. Several years later I found out why; not just because she told me her reasons, but because I found out the hard way. 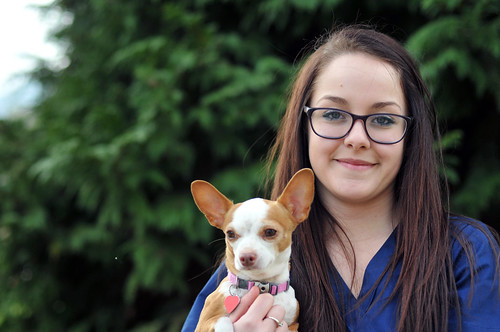 I did a lot of research and found just the right dog for me. One that did not shed, did not have a lot of medical problems, and was not high maintenance. I also did extensive research on where the best place to find a healthy dog that was not the product of inbreeding. So when I approached my folks with my presentation and I had the money saved up for the purchase they allowed me to proceed. They were satisfied that I would be responsible and take care of my pet.

The breeder I had picked out was in a small town about a hundred miles from where we lived. My mom drove me and my little brother was along for the ride. There were several litters of puppies to look through but my eye immediately was drawn to the runt of the litter. We were looking at Toy Fox Terriers and they were all supposed to be less than ten pounds when they were full grown. They are bred to have short tails but this little runt had none! When I started looking at her the breeder told me that they would discount her because she could not be shown without a tail. But she was still very much full blooded and would have her papers. I was not interested in showing dogs so this sounded like a great deal.

While mom and I were talking this over with the breeder we noticed that my little brother had taken a shine to a puppy that was all alone in a cage. We asked her why he was alone and why he looked so much larger than the other puppies. She told us he was a fluke and that they could tell he was already going to be too large to fit into a full bred, paper carrying dog so he was also discounted. As you have probably already guessed we ended up with two puppies that day. I was for it because my brother was a rough and tumble kind of kid and I was afraid he would love my little dog to death.

My grandmother, the anti-pet grandmother that watched us after school was not pleased. I just could not figure her out, even when she shared her story about why she was anti-pet. I was just too young (age fourteen) to get it but since then I have learned to appreciate where she was coming from. She said that my grandfather would bring home puppies every time she was pregnant with each one of her children. She was a stay at home wife and mother and she worked hard to make everything just right. Every time she had a baby she had two or three puppies to potty train and take care of at the same time she had a new born. And my grandfather never took care of the animals he brought home, he just played with them. At this point in my life and after my experience with animals to date I can definitely see how this could be off-putting!

I did my best to include my younger brother in the care of the dogs but it ended up being too much responsibility for him. My brother became frustrated with the responsibility and it was all left up to me. So I pretty much took over both dogs.

A few months later my grandmother (yes, the one who is not a pet person) promised my brother that if he would bring his grades up in school she would take him to the pet store to look at the birds. They had a huge cage filled with canaries, finches, and parakeets of all different colors and it was a magical place that my brother loved to visit. Well, while there it seems a parakeet took a great liking to my brother and grandma ended up buying him the bird! I guess the sweetness got the best of her because this little bird absolutely loved my brother from the start. And not only that but within a few weeks this little parakeet was talking! He named the bird Finjy and told him he was a pretty bird. So the little guy’s first words were, “Finjy is a pretty bird.” It was just as clear as could be and then he took off from there.

Dad had never owned a bird and so he was fascinated by this bird. He was not in the least bit afraid of anyone and would sit and play with you and talk to you for as long as you liked. This started something that almost ended my love affair with animals. Dad brought home an Amazon Parrot and he only liked dad. Then because mom was upset about this purchase and that her home was turning into a jungle he brought her home an Umbrella Cockatoo! No refunds, no returns so there we were. After that he brought home several more birds as well. He also decided that since I did not like the birds that I should have a rabbit. At this point we had two dogs, two cats, approximately six or eight birds, and a rabbit.

After that my brother and my dad brought home frogs and turtles and a huge aquariums to keep them in. We also somehow acquired a Sugar Glider, which looked like a small flying squirrel. We were inundated with animals at this point. Not to mention that on occasion the cats would try and take off with a bird in its mouth and we had to chase it all over the house to rescue it. We were living in a jungle and it was out of control. At this point in my life I could really relate to grandma being anti-pet. Things had really gotten out of hand.

We were faithful owners and caregivers to all of those animals. We took very good care of them and made sure they all got the foods and care they needed and at times it got more than overwhelming. Dad was always working and when he got home he was tired so the care fell mostly to me and some to my brother. My mom worked too but she found herself doing a lot of extra cleaning and shopping for all the right foods. It was as if we owned a pet store. I believe we could have opened up the house and charged admission and made a good living as a neighborhood zoo!

These many years later many of them have passed away from natural causes and my mother’s bird that she grew to love dearly had a genetic disease that took its life. I do not think she realized how much she loved that bird until he was gone. We loved all of them but we did learn a big lesson through that period of our lives especially for mom and I. You can have too many pets and it can result in being anti-pet for quite some time.

Sometimes in families when everyone loves animals it can get out of hand. It is important to sit down and talk about new pets as a family so that it does not get out of control. You often hear about parents refusing to let children have pets but how often do you hear about the family that just kept bringing them in? Even in pet friendly families where they are well taken care of there needs to be limitations on who can bring in a pet and how many, even dads!

Mom still has one of the birds and I still have my little dog. My brother’s dog passed away last year. The rabbit, the Sugar Glider, several birds, the frogs, the turtles, and the cats have gone to heaven as well. We will miss them all. But this has taught me a great lesson for my future family when it comes to pets. We will have limitations!

Always curious, Ashley Hardway is constantly learning and passionate about sharing what she learns with others. Based in Houston, Texas, she loves to help families grow stronger, help their environments and communities, and keep moving forward! Check out @NannyLady on Twitter to connect and find out more.